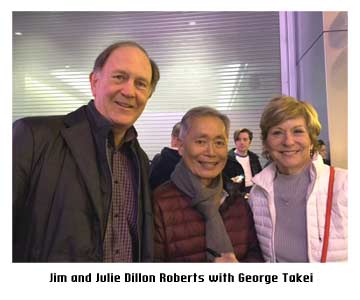 During the holidays, Julie and I were in New York City and had the opportunity to see the Broadway musical Allegiance. It was co-produced by our longtime San Diego friend, Wendy Gillespie, and started here at The Old Globe before going to Broadway. It is the story of the “relocation” camps in World War Two: by any objective standard not one of America’s finest moments.

Pursuant to an Executive Order signed by President Roosevelt in February 1942, over 120,000 Japanese Americans were uprooted from the West Coast and sent to internment camps in Utah, Idaho, Wyoming, Arizona, Colorado, and Arkansas for over four years after Pearl Harbor. Most lost their homes, their businesses, their farms and their savings. Many were taken advantage of by unscrupulous neighbors and people they considered friends. As one writer ably summed it up: It was a time of both overt and covert racism, xenophobia, a thirst for revenge, and greed.

Life was also far from easy once the internees arrived at the camps: the detention centers were usually in remote areas with seasonal changes of alternately freezing, hot, dusty and harsh conditions. Yet those interned lived through terrible injusticewith remarkable grace. Richard Reeves, the famous historian and political scientist, recently wrote a critically acclaimed book on the subject: Infamy: The Shocking Story of the Japanese American Internment in World War II (2015, Henry Holt; for more about this book and Richard Reeves, see RichardReeves.com). Of the 120,000 interned, over 80,000 were “Nisei” – second generation, American-born US citizens.

George Takei is the lead actor in Allegiance and was the driving force over many years to get this play produced and shown on Broadway. George was a child in WWII and grew up in one of the internment camps. Julie and I were privileged to spend a few minutes with George after the play, thanks to Wendy. He is a remarkable man. After hanging out in the VIP reception area with us, George went out onto the sidewalk in front of the theater for about 45 minutes to meet and greet hundreds of his fans who have followed his career from Star Trek days. He posed for selfies, signed autographs, and talked with his fans. The security detail said he does it every night, no matter how cold or windy it is.

A subject touched upon in the play but deserving of even more recognition, was the remarkable service of Japanese-American volunteers in the US armed forces during the war. With their grandparents, parents and siblings in camps, most not being citizens and even having the right to vote, a large group of Japanese-American men of draft age demanded to serve their country and eventually forced our government to accept them into the military. Ironically, instead of sending them to the Pacific, where their language skills could have been helpful, the vast majority were sent to Europe as part of the fabled 442nd Infantry Regiment and 100th (PukaPuka) Infantry Battalion. They saw fierce action in Italy in particular and very high casualty rates. In the end, these two units were the most highly decorated of any Army group in WWII. Honors received included 21 Congressional Medals of Honor and 8 Presidential Unit Citations. Both units also received the Congressional Medal of Honor, one of the few times units rather than individuals have been so honored.

One of the 442nd’s most distinguished members was Senator Dan Inouye of Hawaii, who lost his right arm to a grenade attack and went on to law school under the GI Bill, and then into public service, never losing an election over the next 58 years. Senator Inouye retired from the Senate in 2013 after over 50 years of service.

For more information about this period, I recommend reading the excellent book Just Americans: How the Japanese Americans Won a War at Home and Abroad, by Robert Asahina (2006, Gotham Books/Penguin). Additional information is also available the Wikipedia page covering “Japanese American Service in World War II.”

Even in those dark days, when prejudice was rampant, there were American heroes who answered the call and did what they could to help their friends and neighbors. One of those great people was Bob Fletcher of Sacramento who recently passed away (June, 2013) at the ripe old age of 101. The NY Times published a heart-warming testimonial to Bob at the time of his death. In a nutshell, Bob took over operation of three farms for departing Japanese internee families, worked 18 hour days and lived in the bunkhouse at one of the farms. As a result, none of the families lost their farms and when they returned four years later, they had money in the bank. Bob and his new wife, Teresa, had cleaned the homes in preparation for their return. She had chosen to join her husband in the bunkhouse instead of accepting an offer to live in the family’s home. (See, NY Times June 6, 2013, “Bob Fletcher Dies at 101; Helped Japanese-Americans“.)

These stories of resilience, patriotism in the face of prejudice, and the kindness of others who recognized the injustice done to Japanese Americans during WWII still have the power to inspire us today. — Jim

July 2019 Hero of the Month: Bill Buckner — Grace under Adversity

June 2019 Heroes of the Month: Keanon Lowe and Kendrick Castillo

May 2019 Hero of the Month: Dick Lugar, retired Senator

In an era when politics has definitely gotten nastier, it is worth remembering a kind…

Copyright © 2022 James A. Roberts - All Rights Reserved | Developed by Web-Sites-For-Less.com Kalispell, MT
Back To Top
×