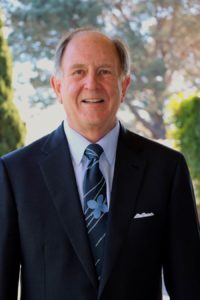 Between 1976 and 1985, Mr. Roberts practiced law in the San Francisco Bay area. He was elevated to partner at Long & Levit in San Francisco, California, and then at Crosby, Heafey, Roach & May, in Oakland. At those firms, Mr. Roberts represented several dozen insurance companies on coverage and bad faith matters and defended a broad spectrum of professionals sued for malpractice. After moving back to San Diego in 1985, he served of counsel to the Law Offices of Brian D. Monaghan and to Thorsnes, Bartolotta, McGuire, and Padilla, and then became a partner in Churchill, Kaplan, and Roberts, where his practice focused on the representation of insurance policyholders in insurance coverage and bad faith cases.

Jim was lead counsel in complex cases with potentially significant insurer liability, including cases involving a broad spectrum of coverage and bad faith actions arising out of first and third party claims. Many involved alleged failure to defend and/or settle cases within policy limits. A notable case provided financial consideration for completing the Academy-Award winning film Amadeus. Among Jim’s other significant cases were the defense of Traveler’s Insurance Company in the Johns-Manville asbestos coverage litigation, in which he reported directly to Floyd Knowlton, Vice President of Claims-Environmental; his representation as Special Counsel with Raoul Kennedy to the Board of Directors of Farmers Inc. regarding the Michael Conn / C.I.D. matter; and the creation of a New York Home Office Bad Faith Claim Unit at Home Insurance Company, as an advisor to John Hilton, Vice-President of Claims.

Many of Jim’s cases involved product liability claims and related coverage issues, such as the appropriate “coverage trigger,” primary and excess disputes (involving horizontal and vertical exhaustion issues), Montrose endorsements, and reformation and rescission claims by and against policyholders.

Beginning in 1978, Jim became involved in major construction defect cases (Westborough Hills, $44 million). Since then, he has settled over $2 billion in CD claims in California, Nevada, Utah and Arizona. (See tab: “Representative Mediations and Settlements – Construction Cases” for a sampling of his CD cases.) Jim was also lead counsel in a broad spectrum of insurance disputes related to the construction industry, including such issues as the applicability of broad-form property damage coverage, subsidence exclusions, contractor limitation endorsements, the scope and interpretation of additional insured endorsements, joint venture coverage, S.I.R.’s and deductibles, Montrose endorsements, and professional services exclusions.

While serving as monitoring counsel for several large excess/umbrella insurers, Jim was actively involved in the resolution of dozens of high-profile wrongful death and catastrophic injury cases.

Jim served as lead counsel in approximately 100 legal and professional malpractice cases as well as in dozens of related coverage disputes. These typically involved interpretation of claims made and first reported policies, coverage for prior acts, intentional acts coverage defenses and consent to settlement issues.

Because of his extensive experience in handling significant insurance coverage and bad faith cases as a practicing attorney, Jim is frequently called upon to mediate coverage disputes between insurance companies, between the companies and their insureds and first and third-party bad faith claims. As a mediator Jim averages 50-60 insurance cases a year and also routinely deals with a myriad of coverage issues attendant to liability claims he is mediating. (See Representative List of Insurance Companies and TPA’s.)

Jim has been an author and lecturer on a wide range of subjects in his areas of expertise. To date, he has written twenty-nine articles, including feature and cover articles for Barclay’s California Law Monthly, The Insurance Litigation Reporter, the Construction Litigation Reporter, the Legal Malpractice Report and the Employee Relations Law Journal. Mr. Roberts has served on the faculty of the Hastings College of Trial Advocacy, and as a panelist and moderator for state and local bar association educational programs and the California Judges Association.

Jim has for many years been involved in the battle against the Boycott/Divestment/Sanction movement that has attempted to isolate and de-legitimize Israel. He was Chairman of the Board, The Committee to End Divestment Now and is currently on the Steering Committee of Presbyterians for Middle East Peace. In these endeavors, he has worked with James R. Woolsey, former director Central Intelligence Agency, Dr. Judea Pearl, Ambassador Dennis Ross, as well as Presbyterian ministers throughout the United States. (See Jim’s Op Ed Piece in the Wall Street Journal, June 15, 2006.) (See www.pfmep.org/Additional Resources / Jim’s guest appearance on The Dennis Prager Syndicated Radio Program, June 30, 2010.)

Jim also has a longstanding commitment to support our Armed Forces, especially the United States Marine Corps. With the assistance of Major General Carl Jensen and Col. Jack Harkins, USMC (ret.), as well as major corporate donors including Roel Construction Co., Casper Company and Hanson Aggregates, Mr. Roberts built a Food Locker at MCAS Miramar that provided supplemental food assistance to an average of 700 enlisted families on an on-going basis. 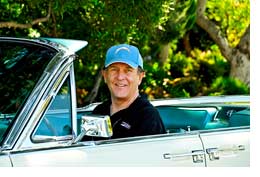 Jim’s wife Julie Dillon Roberts has been dedicated to public service for over a quarter-century in San Diego while at the same time operating her own real estate development company. Her commitments have included the following: President of the Building Industry Association of San Diego County; Chairman, Housing Committee, California Building Industry Association; President of the Monarch School Project; Board of Directors Century Club of San Diego; Board Member and Vice-Chairperson, Centre City Development Corporation.

Jim is also an avid car collector and has restored several classic cars including a 1963 Lincoln Continental convertible (pictured).  His car collection is on the website at Jim’s Car Collection.

Copyright © 2021 James A. Roberts - All Rights Reserved | Developed by Web-Sites-For-Less.com Kalispell, MT
Back To Top
×