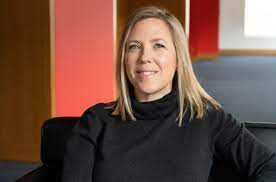 children, but this month was a double blessing. My son Jase became Division President of Beazer

out of his teens. He has been blessed to have worked and been mentored by some great people along

the way: at Pulte, Brookfield and now Beazer, where I have seen first-hand how much he loves going

to work every day.

Veronica had art in her DNA and the obvious choice for college was Williams, which graduates more

museum directors and curators than any other school in the country.** The below announcement

provides a brief bio about her and her accomplishments.

I am so proud of both: not just for their accomplishments but for the kindness and support they give

everyday to the people that they work with: true leadership role models.

FROM THE STANFORD NEWS BY ROBIN WANDER

Bay Area native Veronica Roberts, the curator of modern and contemporary art at the Blanton Museum of Art, will join Stanford University on July 5 as the John and Jill Freidenrich Director at the Cantor Arts Center.

During her tenure at the Blanton, Roberts played an instrumental role in helping the museum become a nationally recognized leader in the field and an admired museum within the community. Working at a museum connected to a university, she is particularly attuned to the teaching mission of academic museums, the value of object-based study, the resources an art museum can provide for interdisciplinary learning, and the importance of engaging with faculty to contextualize collections and exhibitions.

“I am delighted that Veronica Roberts will join Stanford arts leadership as the new director of the Cantor,” said Deborah Cullinan, vice president for the arts. “She brings a deep connection to her hometown Bay Area region and a solid reputation as a collaborative and generous leader. She is eager to lead the development of a new strategic vision for the Cantor that invigorates and amplifies the role that an art museum can play in its campus community, its region and its field.”

Roberts’ appointment comes in the middle of a busy year of returning, rebuilding and reimagining at the Cantor after the pandemic. This is also the year that three exhibitions related to the Asian American Art Initiative open, including The Faces of Ruth Asawa, which opens on Roberts’ second day on the job. “I am particularly excited to collaborate with colleagues across campus to strengthen, expand and bring visibility to the Cantor’s visionary Asian American Art Initiative – a model university art museum program dedicated to fostering scholarship, exhibitions and programming,” said Roberts.

Roberts is also aware that this is a moment to deepen the museum’s commitment to DEIA values. “I firmly believe that institutions can thrive only if diversity, equity, inclusion, accessibility and kindness are modeled internally and communicated outwardly,” she said.

Roberts has been in her current role since 2013. She has curated the nationally touring exhibitions Nina Katchadourian: Curiouser, which traveled to the Cantor in 2017, and Converging Lines: Eva Hesse and Sol LeWitt. She also presented projects with artists Vincent Valdez, Lenka Clayton, Donald Moffett, Susan Philipsz, Ed Ruscha and Diedrick Brackens, and co-curated an exhibition of Charles White works jointly acquired by the Blanton and Art Galleries at Black Studies. She recently opened the exhibition, Assembly: New Acquisitions by Contemporary Black Artists, and has another, Day Jobs, featuring work by Emma Amos, Larry Bell, Mark Bradford, Tishan Hsu, Jim Campbell, Genesis Belanger and many others, opening at the Blanton in early 2023.

In addition to curating exhibitions and producing scholarly publications, Roberts oversaw the reinstallation of the Blanton’s modern and contemporary collection, focusing on bolstering works by women and artists of color and helping to create dedicated spaces for video art and new works by contemporary artists. She also worked closely with Ellsworth Kelly to help realize the artist’s only building, Austin, the chapel-like space filled with monumental colored glass windows that opened in early 2018. She conceived the first-ever outdoor sound art gallery, opening in 2023 on the Blanton grounds, and during the pandemic, co-created Texas Talks Art, a weekly 30-minute virtual conversation between a curator and artist to provide visibility to Texas artists and collaboration among museums across the state. In 2020-21, Roberts was a fellow at the Center for Curatorial Leadership.

Prior to her role at the Blanton, Roberts held curatorial positions at the Museum of Modern Art in New York, the Indianapolis Museum of Art and the Whitney Museum of American Art. She also served as director of research for the Sol LeWitt Wall Drawing Catalogue Raisonné. She earned her MA from the University of California, Santa Barbara, and her BA in art history from Williams College in Massachusetts.

“I am thrilled to be returning to the Bay Area and to a museum I visited countless times with my grandmother, who volunteered for the Cantor. I look forward to sharing the work of many of the most exciting regional, national and international artists working today at the museum and working with the campus, communities across the Bay Area and a global network of alumni supporters to ensure that the Cantor remains an integral part of the intellectual lives of students, faculty, staff and museum visitors,” said Roberts.

Founded when the university opened in 1891, the Cantor Arts Center’s collection spans 5,000 years and includes more than 41,000 works of art from around the globe. These include the renowned collection of Rodin bronze sculptures, which are displayed inside the museum and in the outdoor Rodin Sculpture Garden. With 24 galleries and more than 15 special exhibitions each year, the Cantor is an established resource for teaching and research on campus. It is free and open to the public with reservations Wednesday to Sunday, 11 a.m. to 5 p.m.

(** A great Williams story was the work of several Williams graduates spearheading the saving and return of looted art work by the Nazis in the immediate aftermath of WWII immortalized in the book Monuments Men by Robert Edsel (2009, Hatchett) and the 2014 movie directed by George Clooney.)

May 2022 – Hero of the Month: Jose Andres and World Central Kitchen

As I watched the trauma unfold in Ukraine over the last 60 plus days, I…

Copyright © 2023 James A. Roberts - All Rights Reserved | Developed by Web-Sites-For-Less.com Kalispell, MT
Back To Top
×